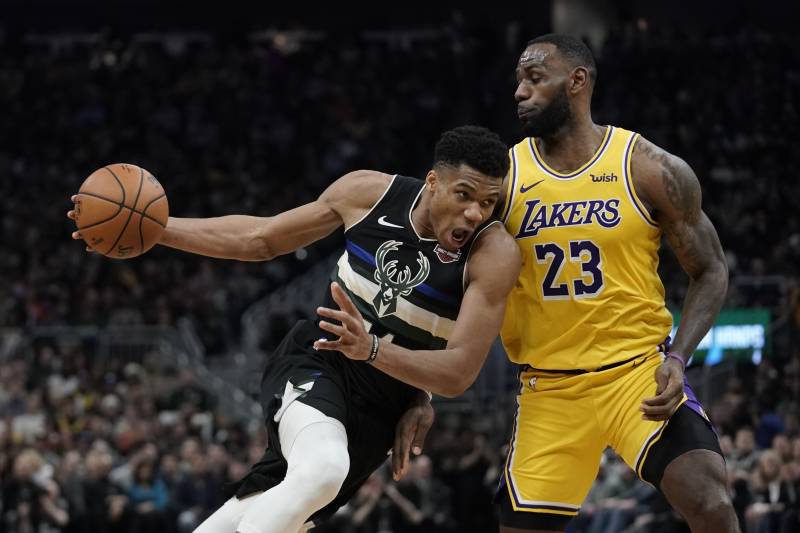 We may still be weeks or even months away from professional sports resuming in the United States, but reports circulated over the weekend that the NBA is looking at a way to resume play. One way that may occur is by relocating all 30 teams to one or two secure locations.

As hard as it may seem to remember, the NBA actually played games this month, including one featuring Giannis Antetokounmpo’s Milwaukee Bucks and LeBron James’ Los Angeles Lakers. The Lakers and Bucks are considered the favorites for the 2020 NBA title. (Image: Morry Gash/Associated Press)

ESPN reported that the basketball league is looking at the path the Chinese Basketball Association is considering to conclude its season. That plan involves clustering teams to play out the remaining regular season games before heading into postseason play.

Currently, the CBA isn’t likely to resume play until the end of April at the earliest. However, foreign players have been told to return to China now to go through a self-quarantine period that would allow them to be able to play when the league resumes.

The Chinese league has been shut down since Jan. 24. If it resumes at the end of April, that would likely put the NBA on a schedule to resume its play by mid-June. That’s typically when the NBA Finals have concluded, but each team will have about 18 or so games left in the regular season.

At this stage, it’s possible the NBA may just revise its playoff structure for this season in order to conclude the season and produce a champion. That could involve having all 30 teams participate in the playoffs.

When the NBA suspended play after Utah Jazz forward Rudy Gobert became the first US-based pro athlete to test positive for the coronavirus, the Milwaukee Bucks led the league and the Eastern Conference with a 53-12 record. The Los Angeles Lakers led the Western Conference thanks to its 49-14 mark.

In the ESPN article, senior writer Brian Windhorst said several ideas have been brought forward by both league executives and players. One such possibility involves Las Vegas.

Vegas certainly has a number of facilities that are not in use right now and have arenas that could allow for multiple games to be played simultaneously. And the city has an established relationship with the NBA as it’s home to both the WNBA’s Aces and a popular 10-day summer league for teams draftees and developing players.

Even if no fans were allowed, hosting the remainder – or perhaps just the restart – would give some of the Vegas strip locations – closed since the middle of March like most commercial casinos – a nice jumpstart as COVID-19 wanes since the 30 NBA teams would need dozens of rooms for players, coaches, and other essential staff.

While the regular season is suspended, the major sportsbooks are still offering odds on which team will win the NBA Championship. Oddsmakers concur that three teams, in particular, stand out in the league.

At William Hill, the Lakers are the favorites at +200, with Milwaukee second at +240 and the Los Angeles Clippers at +300. After that, the next lowest odds are for the Houston Rockets at +1600.

DraftKings lists the Bucks and Lakers as +250 cofavorites, and the Clipper are right behind them at +333.

The post Las Vegas on NBA Radar as League Weighs a Bubble Plan to Resume Play After COVID-19 Wanes appeared first on Casino.org.