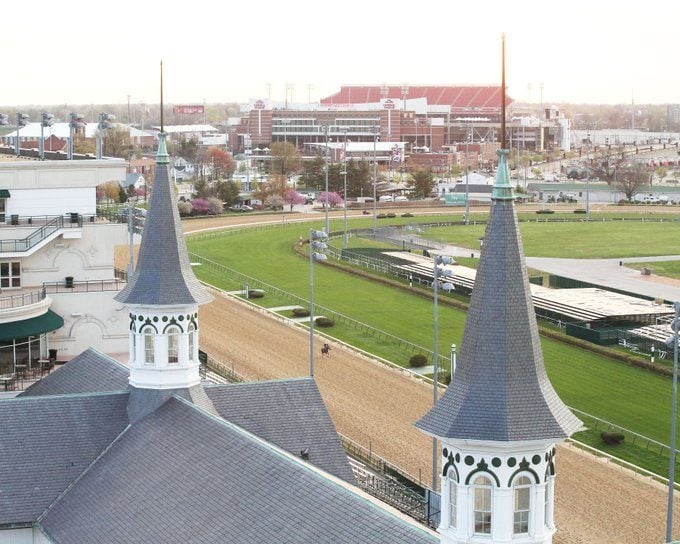 Saturday was supposed to be opening day at Churchill Downs, but like most sports venues across the country, the Louisville race track sat vacant due to the COVID-19 crisis. When horse racing can resume at the venerable Kentucky landmark remains to be seen.

Horses won’t be racing under the famed Twin Spires any time soon as Churchill Down announced on Thursday trainers won’t be able to stable their horses at the Louisville track until at least May 5. (Image: Churchill Downs)

On Thursday, Churchill Downs announced the opening of the track’s barns, as well as a nearby training center, to horsemen would be delayed again, this time until at least May 5. Those areas were supposed to open on March 17, but the track has kept those areas closed under the guidance of Gov. Andy Beshear, who has closed non-essential businesses across the state. Earlier this month, officials said they had hoped to open them by this upcoming Tuesday.

In the same statement, the track said that it was working with the governor’s office, Louisville officials, and public health authorities to determine when it may be able to start racing without fans in attendance.

Beshear brought up the discussions during his daily COVID-19 press conference on Saturday, noting that he actually spoke with track officials just before his afternoon briefing.

We are going back and forth,” Beshear told reporters. “Obviously, we are at the height somewhere in the plateau, but that’ll still be our height of this pandemic. They have offered some really detailed proposals, and we’re trying to figure out the how and the when that it will be safe and everybody. The racing industry and public health (officials) want to make sure that it’s done safely and correctly.”

Earlier this month, the Kentucky governor said he thought live racing even without fans was months away.

Currently, racing without a live audience is taking place at seven US tracks. Last week, state officials in Nebraska approved 12 extra days of racing for Fonner Park, which has seen a remarkable increase in betting handle as one of the few tracks still operating. Tampa Bay Downs is seeking a similar extension in Florida. Additionally, the Thoroughbred Owners of California noted Friday that Santa Anita may receive word in the near future from the Los Angeles County Health Department regarding its request to resume racing.

Time may become an issue for Churchill Downs in the near future. Even if the track opens its barns on May 5, a track spokesperson told Casino.org that the horsemen will still need some time to get their horses properly conditioned before Churchill can resume racing.

Churchill Downs’ spring meet is scheduled to run through June 27. Last month, the track announced the rescheduling of the Kentucky Derby from May 2 to Sept. 5. Other major first-week events, including the May 1 Kentucky Oaks are now also slated for early September.

While best known for the Derby, Churchill’s two-month-long spring meet is also a critical period for Kentucky owners and trainers, who rely on the meet and others across the state for their incomes. Keeneland had already canceled its three-week spring meet for earlier this month, although officials at the Lexington track are considering seeking additional dates later this year to make up for the scrapped cards.

Track President Kevin Flanery said in a statement officials are optimistic that horsemen can return “sooner rather than later.” When the track opens, officials will manage it in a phased and controlled manner.

“Horse racing is a unique agricultural business and serves as the prime economic driver for thousands of individuals in the Commonwealth,” Flanery said. “The thoroughbreds we cherish need constant care and it’s a testament to our horsemen who have constantly cared for them this winter and spring in different locales under unique circumstances. We’re working hard to reopen in a responsible and safe environment that will satisfy our public officials.”

The day after Churchill’s spring meet is scheduled to end, Ellis Park in Henderson will begin its summer meet. Ellis has been scheduled to race until Sept. 6, but officials agreed to give Churchill its final weekend for the Derby.

While the actual Run for the Roses won’t take place for at least another four months, Churchill Downs is still finding a way to celebrate the Kentucky Derby on the first Saturday in May.

The track and NBC will host a fundraiser from 3-6 pm ET on May 2 that will feature the track’s first virtual horse race. Virtual sports producer Inspired Entertainment will run the race that features all 13 Triple Crown winners. Developers will use data algorithms and historical handicapping information to help determine the winner.

As a quick aside, let me say this: If Secretariat doesn’t win this, then they need to recheck the data.

No pari-mutuel betting will take place on the computerized race, but fans will be able to go to KentuckyDerby.com starting on April 30 to make a charitable contribution and pick their horse. Those who pick the winner will be entered into a drawing for a VIP Experience for the actual Kentucky Derby in September. In addition, Churchill Downs has pledged to match up to $1 million in contributions, with those most of the funds going to Team Kentucky and a small percentage going to an equine industry relief initiative.